One of the things most of us look forward to when travelling is trying out new food. For some, cuisine might be a primary motivation for packing their bags and taking a trip.

Mexico is renowned for it’s delicious cuisine. In this article I will detail the cuisine that I’ve experienced bicycling through the different regions of Mexico in the last four months. I will specifically be talking about the traditional (most common) cuisine of the area or state. If you’re in a city in one of these areas you will generally have a wide variety of food options to choose from.

Northern Mexico is mostly a desert like environment which means vegetation is very sparse and hard to come by. If you’re a vegetarian visiting the small towns of Northern Mexico you will most likely find yourself eating alot of refried beans. For meat eaters this isin’t as bad of a predicament. Restaurants found in small towns typically didn’t have menus and therefore the person serving you the food just tells you your options:

Breakfast: Eggs (either with sausage or some other kind of meat and sometimes onions if you ask), refried beans and of course as with most mexican meals; tortillas! For coffee you’re usually brought a cup of hot water and left to assemble the rest yourself with the Nescafé Instant and sugar found on the table. The silver lining here is that you can make the coffee as strong as you want it. 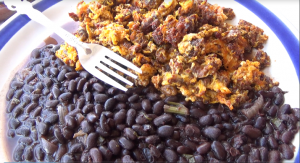 Lunch or dinner: lunch for me often resembled breakfast but with more meat (typically drowned in some kind of salsa) and no eggs. 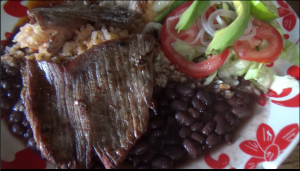 My late night favorite (Mexican usually eat dinner from 8 to 10pm) is tacos! These consist of meat (beef, pork or chicken) onions, cilantro and spicy salsa. Sometimes they will even have some particular (unusual for me) cuts such as tongue and various organs incuding brains! Although I haven’t tried the brain tacos my favorite has to be the Al Pastor taco which is made of salty marinated pork and sometimes pineaple depending where you get it. 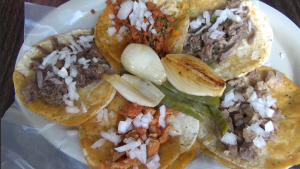 Cuisine in the state of Durango is probably best known for it’s gorditas. These are taco esque bread pockets with different variations of stuffing. Places that serve gorditas will typically have atleast three different types of stuffing (with different meats, sauce, and vegetables or potatos) options so I recommend trying them all as most people can handle 3 gorditas.

Mexico’s west coast is lush with vegetation which means you can get a salad if you think your immune system is up for it.

Being on the coast means seafood is now in play. All types of seafood (shrimp is popular) can be offered raw, as a grilled or fried filet, in a salad, tacos or tostadas. Tostadas are a flat crunchy taco with the food on top eaten like a garnished cracker. 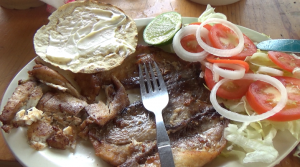 Fish filet with Salad and Tostadas

My favorite seafood was a tostada called Ceviche Guerrerro (tuna, onions and a tangy mayonaise like sauce) which I ate quiet a few times in San Pancho, Nayarit.

Most of my time in Central Mexico was spent in cities and therefore most of the cuisine found elsewhere in the country was available here.

I often go for street food in Mexico as it’s almost always cheaper than procuring it from a restaurant. With that being said I did notice some street foods that seemed more popular here than the rest of the country.

Tortas are sandwhiches that often contain pork, tomtoes, avocado, onions and some salty sauce. The distinctive feature is the big fresh fluffy bread holding all the goodness together. I love tortas I ate alot of them. 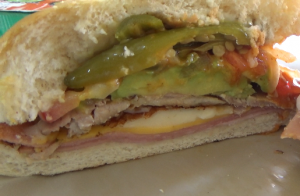 Another popular street food is tamales. Although there are many variations of the tamale, in my experience these are mostly of a corn based dough and a little bit of meat (either pork or chicken). They’re steamed in a corn husk and served with a side of salsa. Although these aren’t the most nutritious they’re very affordable usually being sold for 10 pesos or less each.

The state of Oaxaca is home to great and unique coffee, chocolate, cheese, Mezacale (similar to tequila) and chapulines (grasshopers). 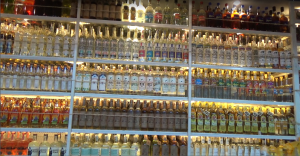 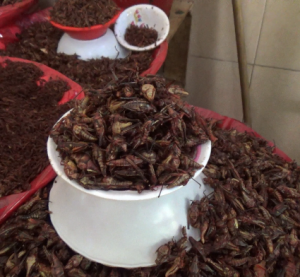 Chapulines and other delicacies

It’s also known for the meal I probably ate the most in Oaxaca: tlayudas. Tlayudas are like a giant crunchy quesadilla typically containing refried beans, tomatoes, onions, avocado, cheese and beef with salsas offered on the side. 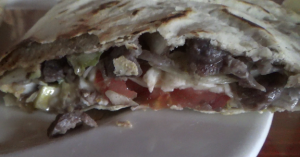 Tlayuda. Just what I needed.

While I was visiting the town of Chiapas de Chorzo (a small town in Chiapas) a local was nice enough to show me where to get the region’s tradicional cuisine. The meal consisted of a pork and onion soup (called Cochito) which was beautifully seasoned. To drink I had a pozol which is a corn and chocolate drink that you have to stir before taking a sip so that all the sediment doesn’t accumulate at the bottom of your cup. It was delicious and a perfect compliment to the soup. 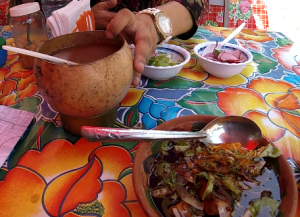 If you love eating meat, cheese and bread (this is me) Mexico will treat you right with endless combinations of these 3 food groups. In my four months in Mexico I didn’t come close to trying everything there was to eat in this great country. I hope this article wet your appetite to go visit Mexico and try this wonderful food for yourself.

To see a map of everywhere I went in Mexico (and everywhere else on my bicycle tour from Canada to Argentina) you can click here.

Have a great one!